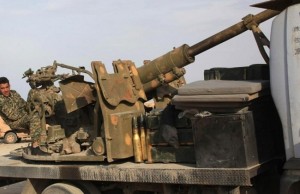 On Tuesday morning, Syrian army troops broke a more than two-year-long siege by ISIS at a government air base in Aleppo.

The soldiers, which reportedly included Lebanese and Iranian militia members, broke through the so-called Islamic State’s battle lines just west of the Kweyris air base and relieved government troops who had been holed up in the base while under siege. Read more at The Daily Star.