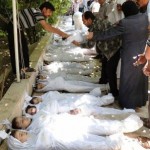 Samantha Power, the U.S. ambassador to the UN, expressed concern on Thursday that Syria’s government might be harboring undeclared chemical weapons, hidden from the international operation to purge them over the past year, and that Islamist militant extremists in that country could seize control of them. “I want to stress that much more work still needs to be done on Syria’s chemical weapons program,” Power said.

Sigrid Kaag, the UN official coordinating the Syrian chemical weapons disarmament effort, said Syria had yet to address “some discrepancies or questions” about whether it had accounted for all of the chemical weapons in its arsenal.

She also said that Syria had yet to destroy seven hangars and five tunnels used for mixing and storing the weapons – as required under the chemical weapons treaty that Syria has signed.