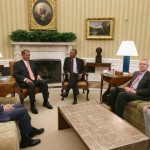 President Obama plans to ask Congress to quickly authorize the arming of Syrian opposition forces, as he moves forward on his own with a broader effort-both military and political-to combat militants in Syria and Iraq, according to administration officials.

He is also reportedly considering airstrikes within Syria to expand the campaign against ISIS. The president will brief the American people on his plans in a prime-time address to the nation tonight.

Obama’s decision to address the public directly shows how seriously he regards the threat posed by Islamic State militants battling in Syria and Iraq to form an Islamic state.

The president has said he has the authority to take action against Islamic State, but would welcome action from Congress that would help the overall effort. Obama huddled with congressional leaders ahead of his address. Some have expressed skepticism regarding Obama’s previous call for funds to fight ISIS, as the administration failed to detail how the money would be spent. Read more.