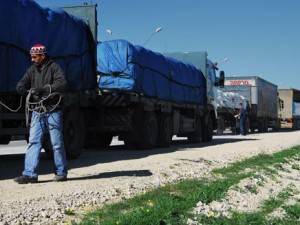 An Israeli truck driver, fed up at near-incessant Hamas rocket fire into Israel, took matters into his own hands on Sunday and used his truck to block an aid convoy from entering the coastal enclave, Israel’s Channel 2 reported.

Israel’s Civil Authority (COGAT) has continued to allow hundreds of tons of humanitarian aid in, in order to alleviate daily conditions for the strip’s 1.6 million residents inhabiting the 139 square mile area.

He’d had enough of the hundreds of rockets in the sixth day of Operation Protective Edge, and the thousands before then, and for three hours refused to move his vehicle parked across the two-lane road leading to the crossing point, at the southern end of the Strip.

His wildcat strike halted a several-kilometer-long line of trucks carrying goods to the Palestinians.

“I have no problem with them receiving humanitarian aid,” he told Israel’s Channel 2 News. “Gas, fuel, medical supplies – no problem,” he said. “But cola and all these other luxuries? They fire at us and we’re giving them goods so they can keep firing?” he asked aloud.

“Why are we supplying them concrete – so they can build another tunnel under the kibbutz?” he asked, and claimed that the drivers waiting to deliver their loads support his stance.

“The drivers who were delayed because of me support my position,” he said, adding that some of them are area residents.

“There were even drivers from (the Bedouin Negev city of ) Rahat who agreed with me, saying that they, too, were under fire,” he said, emphasizing that “this isn’t a matter of Arabs against Jews – we’re all against Hamas.”