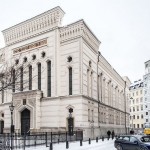 Sweden’s Jewish community has shut down synagogues across the country as a precautionary measure against a possible terrorist threat, the World Jewish Congress said.

According to the chairwoman of the Official Council of Jewish Communities in Sweden, Lena Posner-Körösi, the security situation will be re-assessed on a daily basis.

On Wednesday, Sweden’s terror level was raised to “high” for the first time in the country’s history as police were hunting a suspected terrorists. The director general of Swedish security service Sapo, Anders Thornberg, told reporters that the agency is “at an intensive operative stage and are working to analyze the information.”

Several European countries have raised their terror alert levels in the wake of the Nov. 13 Paris attacks.