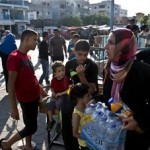 Swedish Foreign Minister Margot Wallstrom sparked outrage in Israel on Friday when she accused the Jewish state of carrying out extrajudicial executions of Palestinian terrorists.

“The [Swedish] foreign minister suggests that Israeli citizens simply give their necks to the murderers trying to stab them with knives,” the Israeli Foreign Ministry said. “The citizens of Israel and its security forces have the right to defend themselves. In Israel, every person who commits a crime is brought in front of a judge, including terrorists. The citizens of Israel have to deal with terrorism that receives support from irresponsible and false statements like that.”

Wallstrom responded that Israel has “the right to defend itself,” but then went on to say that the response could not be “extrajudicial executions” or a reaction that was “disproportionate,” with the “number of dead on the other side greater than the original death toll by several factors.”

Israeli Ambassador to Sweden Isaac Bachman responded to Wallstrom in an interview with Expressen, saying, “To focus on the actions terrorism victims take in self-defense only serves to draw attention away from the horrors of terrorism. Instead, we should condemn and act to stop the perpetrators, the financiers and the inciters of terrorism.”