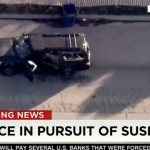 Authorities are continuing to investigate a Redlands home tied to Syed Farook, the suspect identified in connection with the mass shootings that killed at least 14 people and injured at least 17 people at a social services center in San Bernardino on Wednesday morning.

A few hours after the mass shooting, authorities followed a tip to the home on Center Street in Redlands. As officers approached, the suspects fled in a dark SUV. A police pursuit ensued, ending back in San Bernardino, where a gun battle broke out.

It was believed that the Redlands home was the home of Syed Farook’s sister and mother.

The second shooting suspect who was killed in a shootout with authorities was identified as Farook’s wife of two years, Tashfeen Malik, 27.

Neighbors in Redlands were shocked that the suspects had ties to their area.

“I was in awe that it was happening four houses down from my property,” one neighbor said.

A man who has been working in the area said he noticed a half-dozen Middle Eastern men in the area in recent weeks, but decided not to report anything since he did not wish to racially profile those people.

“We sat around lunch thinking, ‘What were they doing around the neighborhood?’” he said. “We’d see them leave where they’re raiding the apartment.”