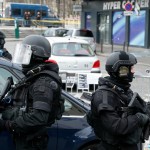 Two suspects have reportedly been arrested on Tuesday in connection with a hostage-taking attack on a Jewish supermarket in eastern Paris this past January.

The man and woman in question are accused of providing weapons to Amedy Coulibaly, who killed four hostages during the incident.

The man’s name is Claude Hermant, according to the Paris prosecutor’s office and he is an “acknowledged mercenary.” Read more at Jewish Telegraph Agency.