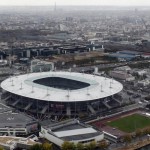 A suicide bomber with a ticket to the France-Germany soccer game tried to enter the Stade de France last night, but he was turned away when security discovered he was wearing explosives.

A security guard interviewed by the Wall Street Journal said the terrorist was frisked and while he tried to back away from security, detonated his bomb.