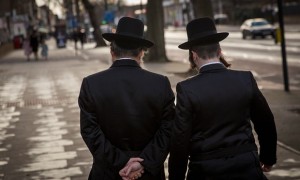 The Guardian reports: Ultra-Orthodox Jews are to make up the majority of British Jews before the end of this century, as high birth and low death rates drive population growth, according to a new study.

The growth among the strictly Orthodox population is fueled by a birth rate of seven children per woman, compared with 1.98 per mainstream Jewish woman. The overall birth rate in the UK is 1.93; for Christians it is 1.53 and for Muslims 3.25.

The research, by Daniel Staetsky and Jonathan Boyd and published this week by the Institute for Jewish Policy Research (JPR), is claimed to be the first demographic overview of the UK’s ultra-orthodox community. The authors of Strictly Orthodox Rising show that the “British Jewish population is on the verge of significant demographic change”.

“Some express unease about the extent to which [ultra-Orthodox Jews] are integrated into British society, and apprehension about a potentially unwelcome change in the religious, educational, economic and occupational profile within British Jewry,” the study says.

Others welcome the changes, focusing on “the renewed population growth and vigorous Jewish religious life that the expansion of the strictly Orthodox population seems to have generated.”

Examining data from the 2011 census and community surveys, the report says the strictly Orthodox community is growing at 4.8% a year, while the number of secular and moderately religious Jews is declining by 0.3%.

Read more at The Guardian.