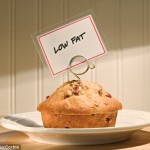 Health labels on food could be making people fatter rather than helping them to lose weight, a study has found.

People eat more food than they should if it is labelled healthy because they think it is less filling than fatty options.

Consumers tend to binge when they see nutritional signs because they automatically assume they are making a better choice.

As a result they could end up consuming more calories overall, researchers said.
The results suggest that, while eating too much is often the cause of obesity, eating too much healthy food could make you fat too.

Food labels in the UK have been a source of controversy and products are supposed to have a ‘traffic light’ system which shows how much salt, fat and sugar the item contains.

But some consumers see the labels as overbearing and another example of the nanny state.

The researchers conducted three experiments; the first involved 50 participants who were tested to see how they saw the relationship between the concepts of healthy and filling.

The second test involved measuring the hunger levels of 40 people after eating a cookie that was described as either healthy or unhealthy.