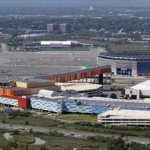 When the world tunes in to the Super Bowl Sunday night, aerial shots of MetLife Stadium in the New Jersey Meadowlands might afford a glimpse of a strangely colored structure the governor once dubbed “the ugliest…building in New Jersey.”

The shell of the former Meadowlands “Xanadu” project stands a Peyton Manning Hail Mary from the field where the Denver Broncos and Seattle Seahawks will square off for the Vince Lombardi trophy. First approved in 2003, it has passed through the hands of three developers and been envisioned as everything from a massive water park to a giant shopping mall, complete with an indoor ski slope. For now, it sits unfinished, a garish money pit that has so far sucked up an estimated $3.5 billion.