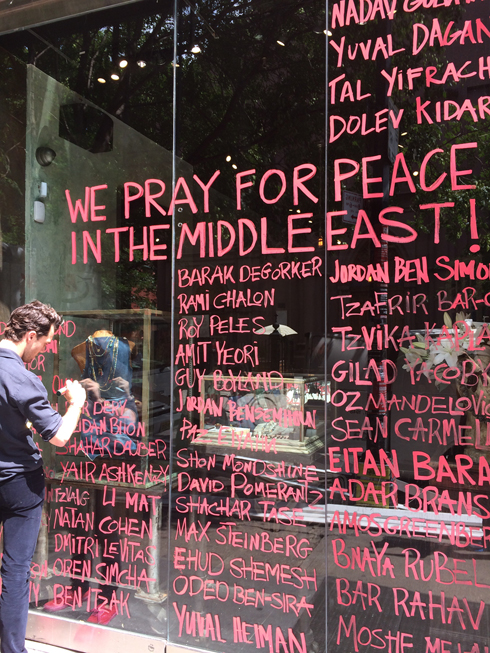 A storefront window of a high-end jewelry shop in downtown Manhattan, covered entirely in red, has grabbed the attention of passersby in recent weeks. Those who stopped, finding themselves engrossed in the writing, discovered that this was not just another advertisement, but rather an attempt to commemorate the 64 soldiers who were killed during Operation Protective Edge, Ynet reports.

The man responsible for the display is Eli Halili, a 35-year-old Israeli who has decided to educate New Yorkers on the Israel-Gaza conflict. “It’s tough being away from home when your family, friends and people are at war and under threat of rockets,” he told Ynet.

“You’re busy with work and see people around you living their lives as usual, going to restaurants, shopping. You can’t blame them, but people have no idea what’s going on in Israel, so I decided to take advantage of my shop window to teach them what is happening in the country.

Halili was born and raised in Beit Uziel, served in the Intelligence Corps and after his military service moved to New York and worked in the jewelry industry. He has been running a thriving jewelry shop in Manhattan for the past eight years, displaying jewelry that combines historical elements of Israel and the Middle East.

Halili said that he initiated the tribute to the fallen soldiers without thinking about its implications for his business, but was surprised at the amount of positive responses that the unique window display evoked.

The person behind the idea, Halili added, was his partner, Gary. “He isn’t an Israeli, he grew up as a Mormon but he isn’t religious. We share similar values, he is close to Israel and close to me, and when the war started, we had the Israeli channel open all the time. After a while, we decided to write at the entrance ‘we pray for peace in the Middle East,'” Halili recollected.

“We wanted to convey a general message. When news first came of fallen soldiers, Gary suggested to use the shop window to display photographs of soldiers killed in combat. I thought that it would be more powerful to write their names with a red marker.”

As the operation progressed, the list of fallen soldiers sadly became longer, and the two were forced to add more and more names, which they took from the IDF’s website. However, their small consolations were the reactions that the window display garnered: “They’re wonderful, people stop by the window and take photographs, applaud, blow us kisses,” Halili happily reported. “Some people come in just to say hello. People greatly identify with us and support Israel. Read more at Ynet.