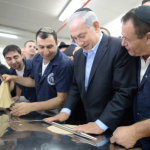 The matzah baked by Prime Minister Bibi Netanyahu at Kfar Chabad on Tuesday was tossed in the trash after his visit. The reason given was strict adherence to halacha, but reports in the Israeli media could not help but make a tumult out of it, connecting the incident to the ongoing crisis between the prime minister and the chareidi community over the recently passed universal conscription law, according to Times of Israel.

With the prime minister’s exclusion of the chareidi parties – his “natural partners” – from the governing coalition early last year, Netanyahu has since been referred to as “the big traitor” and “charedi hunter” within the community, according to the Walla News website.

So when the prime minister’s matzos were thrown out in Kfar Chabad, after he had taken the time to pour water on the dough, flatten it, roll it, etc., the Israeli media pounced on the opportunity to state that it was some small “retribution” for Netanyahu’s policies, according to Times of Israel.

Many view the prime minister’s visit to the bakery as a publicity stunt.

A spokesman for Chabad, however, took issue with the way the events were presented in the media, saying that the reason for throwing out the matzah had nothing to do with Netanyahu.

“At a matzah bakery, there are always matzot that get eliminated for having laid on the table too long, or for other halachic reasons,” said Menachem Brod. “During Netanyahu’s visit, some of the workers left the task of rolling the matzah and gathered around the prime minister. The overseer subsequently ordered those matzah that had been left out to be invalidated. There was no connection to the matzot touched by the prime minister, and any attempt to tie the two things together is an ugly attempt to fan the flames of hatred and division, and Chabad rejects it in disgust,” he added.