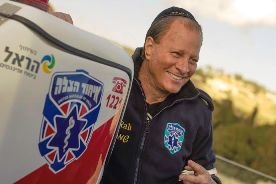 Stewart Rahr, a.k.a “The King of Fun”, surprised a jubilant group of United Hatzalah supporters by quadrupling his initial donation of 12 life-saving ambucycles at a ceremony held in his honor on Tuesday, January 28. The self-made billionaire, 67, from New York donated 50 ambucycles worth $1.3 million during a dedication ceremony on the roof of Aish HaTorah, in Jerusalem’s Old City, overlooking the Kotel Plaza.

Rahr, the founder and CEO of Kinray Inc, decided to make the initial donation after watching United Hatzalah founder Eli Beer’s TED talk. At first he pledged 4 ambucycles and then sent out an e-mail to his personal rolodex of over 700 A-list celebrities asking them to donate whatever they could to United Hatzalah, with a promise to match every donation.
The list includes names like Michael Milken, Leonardo DiCaprio, Harvey Weinstein, Sheldon Adelson, Jeff Schottenstein, Alicia Keys, Andrea Bocceli, Bill Clinton, Tony Blair, Mark Wahlberg, Leon Black, Mort Zuckerman, Donald Trump, Rupert Murdoch, Andre Agassi, Ari Emmanuel, Ashton Kutcher, Marc Cuban, Jay Leno and Tommy Hilfiger.
The life-saving ambucycles, which can reach casualties in an average of three minutes and considered the world’s fastest responders, were transported via a crane up to the roof of the Aish HaTorah building in Jerusalem’s Old City overlooking the Western Wall Plaza and Temple Mount.

“I just love the energy level of United Hatzalah,” Rahr stated at Tuesday’s event, against the backdrop of the Western Wall Plaza and Temple Mount. “I just love everyone sitting here who are part of this Mitzvah today. This is the type of organization I relate to, starting from the bottom just like I started.”

Founded and directed by Eli Beer, United Hatzalah is Israel’s first and largest fully-volunteer emergency rapid response service and recently united with ZAKA. By utilizing its fleet of over 250 ambucycles and its patented GPS based dispatch technology, United Hatzalah’s 2,300 medical volunteers respond to emergencies and are able to arrive first on site to administer urgent care within minutes from the initial call of distress – bridging the gap between emergency and ambulance arrival.

“To see these wonderful ambucycles and to know they save lives – it is truly exciting. If you can save one life, it’s worth it, no matter how much you have to spend,” declared Rahr.