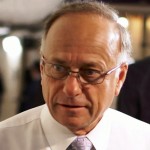 Iowa Rep. Steve King has left a seat empty during tonight’s State of the Union address to honor the lives of 55 million aborted babies.

King’s action is in response to President Barack Obama announcing he left a seat open next to first lady Michelle Obama to remember those killed by gun violence.

“The first tears we have seen [Obama] shed in seven years were for the victims of the tragic Sandy Hook School shooting,” King said in a press release. “As far as we know, Obama has never shed a single tear for even one of the more than 9 million babies aborted under his watch. He is the most pro-abortion president ever.”

“The San Bernardino victims’ body temperatures had declined only from 98.6 to 93 degrees F when Obama twisted the ‘Allah Akbar’ screaming bloodlust into an anti-gun, anti-Second Amendment tirade,” King said. “I am sickened by the acts of war twisted into ‘workplace violence’ and by a president who would veto the Born-Alive Abortion Survivors Protection Act, H.R. 3504 that would protect the lives, at least of those who survived the attempt on their lives, by abortionists.”

King’s own seat is empty as well during the president’s address to the joint session of Congress.

“I will be in the Member’s chapel praying for God to raise up a leader whom he will use to restore the Soul of America,” King said.

Texas Sen. Ted Cruz, who is seeking the Republican presidential nomination, said last week that he, too, will be leaving one of his guest seats empty for “over 50 million unborn children killed” since the Roe v. Wade decision.