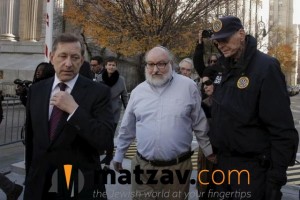 On July 28, 2015, the United States Parole Commission issued a Notice of Action granting our client Jonathan Pollard release on parole.  He was released Friday, November 20, 2015, after spending 30 years in prison.  In 1986, he pleaded guilty to one count of conspiracy to commit espionage without intent to harm the United States.  He had delivered classified information to the State of Israel.

The Parole Commission has imposed conditions of parole that are unreasonable and unlawful.  Accordingly, we have today commenced a proceeding in the United States District Court for the Southern District of New York challenging these illegal conditions and asking the court to vacate them.

In granting release on parole, the Parole Commission followed the procedure mandated by the U.S. parole statute.  Under the statute, after serving 30 years of a life sentence, a prisoner is entitled to release on parole unless the Parole Commission finds either (a) that the prisoner has frequently and seriously violated the rules of the prison; or (b) that there is a reasonable probability that upon release, the prisoner will commit further crimes.

With regard to the first statutory ground for denying parole, it is undisputed that Jonathan Pollard has been a model prisoner.  There has never been any claim that parole should be denied based upon Mr. Pollard’s behavior in prison.

As for the second statutory ground for denying parole, during the months leading up to Mr. Pollard’s July 2015 parole hearing, Mr. Pollard’s lawyers, Eliot Lauer and Jacques Semmelman of Curtis, Mallet-Prevost, Colt & Mosle LLP, were in contact with the United States Department of Justice to determine whether it would agree that it was not reasonably probable that Mr. Pollard would commit any further crimes upon release.  No one had ever suggested that Mr. Pollard would engage in acts of violence; thus, the sole question for parole was whether the Department of Justice would claim Mr. Pollard was likely to reveal classified information – if any – that might still be in his head after 30 years.

The Support From Bud McFarlane and Dennis DeConcini

Mr. Pollard’s counsel also submitted a Declaration from former Senator Dennis DeConcini of Arizona, who served on the Senate Intelligence Committee at the time of Mr. Pollard’s arrest, and who is knowledgeable about the classified aspects of the case.  Former Senator DeConcini affirmed that ”the information would not be of value to anyone today.”

The DOJ Agrees It Is Not Reasonably Probable That Mr. Pollard Will Commit Another Crime

On July 1, 2015, after consultation with U.S. Defense and Intelligence agencies, the Department of Justice agreed in writing that it would not contend that it was reasonably probable that Mr. Pollard would commit any further crimes. The Parole Commission then acted in accordance with the statute and the evidence, and granted Mr. Pollard release on parole.

The Unreasonable and Unlawful Conditions

Notwithstanding its conclusion – necessary to granting parole – that it is not reasonably probable that Mr. Pollard will commit any further crimes, the Parole Commission has imposed onerous and oppressive conditions of parole.  These include a requirement that Mr. Pollard wear an electronic bracelet at all times for GPS tracking of his whereabouts, as well as the unfettered monitoring and inspection of Mr. Pollard’s computers as well as those of any employer who chooses to hire him.  According to the Parole Commission, the putative justification for these conditions is to ensure that Mr. Pollard does not commit any further crimes, specifically the disclosure of classified information.

Any Information Is At Least 30 Years Old

The notion that, having fought for and finally obtained his release after serving 30 years in prison, Mr. Pollard will now disclose stale 30-year old information to anyone is preposterous.  Apart from the fact that the information is useless, disclosing it will result in Mr. Pollard’s swift return to prison to serve out his life sentence.

The Parole Commission Has Already Determined That There Is No Reasonable Probability That Mr. Pollard Will Commit Another Crime

Even more disturbingly, the conditions are illegal, as they violate a federal statute, federal regulations, and the Constitution, all of which strictly constrain the imposition of conditions on parolees. The monitoring and tracking conditions imposed on Mr. Pollard are most commonly imposed on pedophiles, stalkers and similarly dangerous felons who must be closely supervised at all times for the protection of their victims. There is no basis whatsoever to treat Mr. Pollard in that manner, and doing so is vindictive and cruel, as well as unlawful.

In sum, these oppressive conditions are unnecessary, unreasonable, contrived, and unlawful.  We have therefore asked the United States District Court for the Southern District of New York to vacate these illegal conditions.