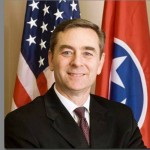 A Republican lawmaker in Tennessee wants to use the state’s National Guard to round up 30 Syrian refugees in his state and stop any more from being resettled.

“We need to activate the Tennessee National Guard and stop them from coming in to the state by whatever means we can,” said State Rep. Glen Casada. “I’m not worried about what a bureaucrat in D.C. or an unelected judge thinks…. We need to gather up and politely take them back to the ICE center and say, ‘They’re not coming to Tennessee, they’re yours.’”

The Tennessean asked Casada to elaborate on what authority he could use to snatch up people. “Tennessee is a sovereign state. If the federal government is forsaking the obligation to protect our citizens, we need to act.”

At a press conference Wednesday, Casada compared himself to Paul Revere, the man who famously warned colonial militiamen of approaching British troops at the start of the American Revolution.

“I’m just sounding the alarm,” Casada said, after reportedly saying the “blood of innocent Tennesseans would be on the head” of the state’s American Civil Liberties Union representative who denounced the lawmaker’s earlier comments. He also suggested his actions are a form of “civil disobedience.” Read more at The Tennessean.