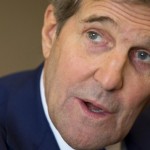 The State Department believes it brought peace and security to Syria in 2015. A year-in-review blog post that details this year’s achievements in foreign policy (and uses the hashtag #2015in5words) summed up the United States’ involvement in Syria as: “Bringing Peace, Security to Syria.”

John Kirby, spokesman for the State Department and the post’s author, touts the United States’ “humanitarian aid contributions” to the war-torn country and praises Secretary of State John Kerry for his role in the UN Security Council resolution that laid plans for upcoming peace talks.

“From the humanitarian crisis endured by refugees fleeing violence, to the reprehensible human-rights violations and violence carried out by the Asad [sic] regime, the Syrian people have borne a heavy load,” Kirby writes. Read more at Politico.