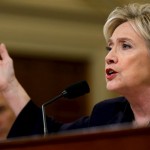 The U.S. State Department released 7,000 pages of Hillary Clinton’s private email messages on Friday afternoon, bringing the tally of disclosed records to about half of all the emails the agency will eventually release.

The last batch was released in late September and was widely publicized for humorous personal notes about gefilte fish and controversial ones involving long-time confidant Sid Blumenthal.