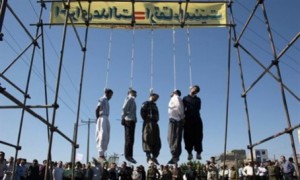 US State Department Spokesperson Mark Toner gave a particularly lackluster response on Tuesday to reports that an Iranian-American dual citizen had been executed by Iran, in a complete flaunting of US requests for a stay of execution, ARUTZ SHEVA reports.

The Iran Human Rights NPO reported on Tuesday that Hamid Samiei was executed on November 4 for an alleged murder committed in California. Samiei was arrested on his return to his Iran and sentenced to death for allegedly murdering another Iranian, identified as Behrouz Janmohammadi, according to the reports.

Samiei reportedly killed his erstwhile friend after the latter drew a knife on him during a quarrel. Samiei then returned to Iran in where he was arrested in 2008, and suffered “extreme torture and was forced to confess against himself, and a lot of his confessions were false.” The report noted that Samiei’s family visited the Swiss Embassy in Tehran to meet with representatives responsible for protecting US interests in Iran.

During his daily briefing on Tuesday, Toner was put on the spot by Associated Press reporter Matt Lee, who asked him about the reported execution.

Toner’s comments can be viewed here.

Arutz Sheva reports that Toner said that the State Department was notified of the case on October 28, after the Swiss Embassy in Tehran learned of the impending execution and relayed the message.

“We don’t yet have official confirmation of his death and are obviously seeking more information. This case was brought to our attention on October 28, so a very short time ago,” said Toner, emphasizing that the State Department was not informed of the case prior to that date.