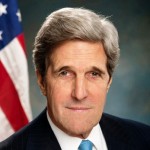 The reported allegations are being made during a difficult time between the United States and Israel, with Kerry being accused of favoring Hamas in recent negotiations to end a 27-day conflict between Israel and the Palestinian-backed Islamic terror group.

In addition, Israel Prime Minister Bibi Netanyahu reportedly was upset with the White House recently for trying to force a temporary cease-fire between the sides.

And on Sunday, the State Department issued a statement critical of an Israel missile attack in the Hamas-occupied Gaza strip that apparently struck a humanitarian facility sheltering 3,000 people displaced from the conflict.

The agency did not respond to a request to verify the alleged eavesdropping on Kerry.

Kerry reportedly used encrypted and non-secured phone lines during the talks. And the signals were intercepted when being transmitted unencrypted via satellite, the publication reports.