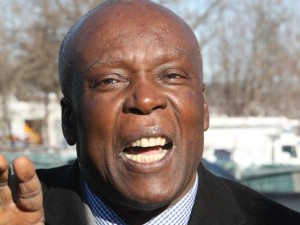 LoHud reports: Spring Valley, NY – Mayor Demeza Delhomme pledged to vote against all building permit applications by Jewish developers to retaliate against Jews for supporting political opponents, according to a secretly recorded conversation obtained exclusively by The Journal News.

Asked whether he would vote against, “anything a Jew brings,” Delhomme replied, “Yes,” during a conversation recorded last March at Village Hall.

Delhomme later said, “I swear to God. On the application. Any Jew that comes in.”

The mayor, who is Haitian, said if a Haitian brought the same application as a Jew, he would support it.

“I’m voting for them,” he said on the recording. “Because they voted for me. They supported me.”

Delhomme refused to answer a reporter’s questions about the roughly 40-minute recording, but denies discriminating against anyone.

“Do you have proof that I have been discriminating against anybody?” he asked a reporter. “If you don’t have proof of it, stay the hell away from me,” he said as he hung up the phone.

The mayor, like members of the Board of Trustees, can vote on special permit applications by developers that require public hearings.

His rant was part of a political strategy to pressure Trustee Asher Grossman, who is an Orthodox Jew, to support his agenda, so he could obtain majority control of the board, according to a lawsuit by three village residents that seeks to remove Delhomme from office for misconduct and corruption.

The lawsuit claims it’s part of a broader pattern of discrimination that includes telling a building official not to issue permits to two Jewish developers last January and obstructing a Jewish applicant from obtaining a public hearing the following month.

The man who made the recording isn’t being identified by the newspaper because he fears retaliation. Excerpts of the recording, which hasn’t been introduced in court, are being made public for the first time by the The Journal News.

Delhomme can be heard questioning why Jews backed Trustee Vilair Fonvil, who is Haitian, calling it a “stupid thing” for them to think they could team with Fonvil to “destroy” him.

“Ha!,” he said. “I’m the mayor for four years … I can take a few things from the agenda. Vilair can talk. He can vote. I tell the building department, “Don’t put in there” and I’m done. Let them go to court. Go to court fighting. What the (expletive) I care? … I’m not going to be in court.”

Delhomme threatened to reduce floor area ratio (FAR) requirements which control the size of buildings that can be constructed.

“I can change all the zoning back where it’s supposed to be,” he said. “Crush everybody. Crrrk. That’s it. I can put it 30. I could drop it down from 60 where it is and put it at 20. Who’s gonna beat me? I did it and everybody’s gonna be dead.”

He backed up the threat, the lawsuit says, ordering a study, without consulting with the village board, to reduce FAR requirements in residential zones. In some zones, the study proposes reducing FAR requirements from .65 to .35.

Michael Kauker, a development consultant for the village, doesn’t recall who asked for the study, but spoke to Delhomme, Fonvil and Building Inspector Walter Booker about it, he said. Booker declined to comment. Kauker’s memo about the study was sent to Delhomme and the trustees last September.

Fonvil said Delhomme, “went on by himself to the consultant … to do a study without our permission,” adding that it cost more than $1,000 and would harm Jews economically if the FAR requirements were changed.

“He would hit them where it hurts because we have a lot of Jewish developers in Ramapo and the village,” Fonvil said. “Something like that would hurt their business.”

At one point, Delhomme can also be heard saying he holds the key to who receives Section 8 public housing assistance. He also complained that he never received an apology for being called anti-Semitic in the past.

“I was hurt, my family was hurt,” he said. “Then I become the mayor. You coming after me. I’m gonna show you who’s the boss. You hurt me twice. I’m not gonna let you hurt me three times.”

It’s not the first time the mayor has been accused of making anti-Semitic remarks. Twelve years ago, when he was a trustee, Delhomme said during his weekly cable television show that all Jews have food stamps and rely on Section 8.

When Rabbi Justin Schwartz, who lives in Spring Valley, exposed the mayor’s remarks at the time, Delhomme called him a person with “20 horns on his head, raping our community at large.”

It’s the latest controversy for Delhomme who declared himself “king” of the village during an outburst in June. A state assemblyman recently accused him of twice interfering  with a school construction project and potentially putting students’ safety at risk. The newspaper previously reported Delhomme was investigated for misconduct after DPW employees, on village time, tried to install a generator at his friend’s house before a snowstorm.

The Anti-Defamation League also condemned the mayor’s comments. “If the facts alleged are true, they are quite troubling,” said Evan Bernstein, director of ADL’s New York Regional Office. “Singling out of any religious or ethnic group is unacceptable, especially by an elected official.”