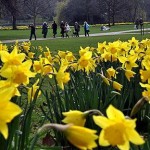 New York – It may say Dec. 25 on the calendar but it sure doesn’t feel like it outside.

Residents woke up to record high temperatures across the region, making this the warmest ever for New York City. The National Weather Service said temperature readings at Central Park reached 66 degrees at 12:31 a.m. today. The previous record was 64 degrees in 1982, reports 1010 WINS.

A noontime temperature in Central Park of 72 degrees Thursday crushed the previous record of 63 degrees, set in 1996. National Weather Service meteorologist Carlie Buccola said 72 degrees was only 3 degrees cooler than it was on July Fourth.

Buccola attributed the warmth to a jet stream keeping cooler temperatures in Canada.