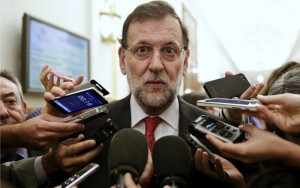 Spanish Prime Minister Mariano Rajoy was punched in the face Wednesday while on the campaign trail.

Police say the individual who punched him was 17 years old and was arrested on the scene. Rajoy began to fall after the hit but was stopped from hitting the ground by a crowd of people who caught him. Read more at Politico.