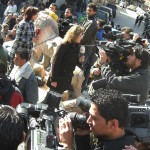 In Spanish, Gutiérrez, who is writing for Melilla Hoy, tweeted, “On Saturday,9th of August, Hamas launched a battery of rockets from the press hotel. What was their intent? To provoke Israel to kill us?#SaveGazaFromHamas.”

The journalist later said he recorded audio of the rockets being launched.

On Twitter, Gutiérrez told followers that he went to Gaza to see the facts for himself.

In another popular tweet in Spanish, Gutiérrez said, “I would be lying if I told you I saw signs of apartheid in Israel. But I’m not going to lie,” posting a photo of an Arab IDF soldier kissing his mother, wearing a hijab, on the cheek.
Many Spaniards are following the lead of actors Javier Bardem and Penelope Cruz, who published a widely read Op-Ed, condemning Israel for the Gazan death toll rather than acknowledge the belligerence of Hamas that has drawn Israel into war.In Spain, amid reports of ISIS militants coming into the country, where they are using Facebook to recruit, the country is split over Israel.

In Spain, ETA, the long-running terror movement from the northern Basque Country, has now been decimated by Spanish police and political will. The group’s violent acts to withdraw from Spain had split families and led to the killing of many political leaders and bystanders from waves of bombings and assassinations, all of which are routinely condemned by the government.

But rather than draw that corollary to their public opinions about Israel, many in Spain, which is estimated to have just 13,000 to 40,000 Jews out of a population of 47 million people, insist on siding with Hamas in Gaza.