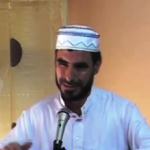 [Video here.] A Spanish Imam has been documented in an anti-Semitic rant in which he called the Jewish people treacherous, war-mongering killers and prayed for God to “destroy the plundering Jews… do not spare a single one of them.”

In a Friday sermon posted to the internet this week and translated by the Middle East Media Research Institute, Sheik Saleheoldine al-Moussaoui of the municipality of Azuqueca De Henares, near Madrid, says: “What is being done to the Muslims in Palestine, in Gaza, as well as in the other Muslim countries – we would have been surprised if it were done by anyone other than the Jews.”

“The Jews are by nature treacherous and war-mongering,” he tells followers. “The Jews and the Zionists have treachery and killing as their way of life. They are a people of enmity and jealousy, the masters of treachery and betrayal.”

Al-Moussaoui says the Jews were described by Allah in the Quran as spreaders of corruption, adding that “the Zionists do not feel alive if they don’t spread corruption.”

He goes on to blame the Jews for killing God’s prophets, in likely reference to Jesus Christ, and says torments of fire await them.

“Oh Allah, destroy the plundering Jews,” he says. “Oh Allah, the Most Merciful, count them one by one, and do not spare a single one of them.”