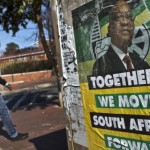 South African authorities said they will prosecute citizens who serve in the Israel Defense Forces, Times of Israel reports.

The warning came after a pro-Palestinian advocacy group opened a case against Dean Goodson of Cape Town, who reportedly is serving in the IDF. Action Forum in Support of Palestine told the South Africa Independent online that it plans to open cases against at least four other South Africans that the group believes are serving in the IDF.

South Africa’s Regulation of Foreign Military Assistance Act regulates the involvement of South Africans in armed conflicts beyond the country’s borders. Those found guilty could be sentenced to jail time.

The country’s defense minister, on the recommendation of the National Conventional Arms Control committee, can grant permission to serve in conflicts abroad.

The warning by South African officials also covered those serving in militaries in Afghanistan and West Africa. South Africa’s Defense Department told the Independent that it has not granted permission to any South African to participate in the current Gaza conflict. The department said it was aware that some may be serving in the IDF without clearance.