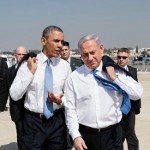 President Obama is considering cutting all ties with Israeli Prime Minister Benjamin Netanyahu, Israel’s YNet News reported on Friday. According to a source cited by the paper, the White House “is contemplating lowering its ties with Israel and putting Kerry as the sole liaison between the two states, as opposed to the open line Netanyahu now enjoys with Obama.”

“The president is pragmatic, if he were to think there was some gain to be made from talking directly with Netanyahu he would do so, but he just prefers not to waste his time,” the White House source said

The report culminates weeks of mounting anger by the White House towards Netanyahu. Administration officials were very critical of Netanyahu’s historic speech earlier this month before a joint session of Congress on the Iranian nuclear threat, and there was even speculation that the White House was attempting to unseat the Israeli Prime Minister.

Following Netanyahu’s landslide electoral victory this week, it appeared as though the tension with the White House might dissipate. The White House took a conciliatory tone on the day of the win, and a Netanyahu loyalist made it clear that the new government would seek to renew trust with the United States.

The peace was short-lived.

The White House quickly resumed hostilities towards Netanyahu in the days following the election. A White House official avoided congratulating the Israeli Prime Minister the day after the win. The White House also directly criticized Netanyahu’s Election Day comments about Arab voter turnout, calling them “cynical.” Then there were several reports that the White House was reconsidering its pro-Israel stance at the United Nations because of Netanyahu’s rescinding of support for Palestinian statehood at this time.

Netanyahu, seemingly in response to the mounting White House hostility, abandoned his pre-election opposition to a two-state solution to the Israeli-Palestinian conflict, seeking again to renew the US-Israel relationship. The White House rejected this overture, and said that it was “re-evaluating” its thinking about relations with Israel.

The tension continued yesterday during a telephone call between President Obama and Israeli Prime Minister. According to the AP,Obama told Netanyahu that the US was indeed reassessing its thinking about the peace process. He also also raised the issue of Netanyahu’s “anti-Arab rhetoric” during the election.