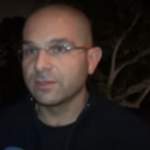 The son of an American-Israeli stabbing victim who died last month following a Yerushalayim terrorist attack said it was morally imperative that social media platforms like Facebook remove incitement to violence regardless of whether such posts are flagged or reported by users.

“Just as it is universally recognized that shouting fire in a crowded theater is dangerous and should be prohibited, so, too, must we now recognize that rampant online incitement is a danger that must be reckoned with immediately, before more innocent people end up as victims,” wrote Micah Akin Lavni in a piece for the New York Times on Tuesday.

“One immediate solution is to remove blatant incitement without waiting for formal complaints — it’s one thing to express a political opinion, even one that supports violent measures, and another to publish a how-to chart designed to train and recruit future terrorists,” wrote Lakin.

He noted that one of his father’s killers was active on Facebook, and posted a martyr’s will the day of the attack. Additionally, nonprofit watchdogs Middle East Media Research Institute (MEMRI) and Palestinian Media Watch (PMW) have been covering incendiary and inciting material on social media, including anatomical graphs laying out the most successful spots to stab a victim, cartoons glorifying stabbings and reenactments of previous attacks.

Lakin’s father, Richard Lakin, succumbed last week to wounds sustained about two weeks earlier — when he was shot in the head and stabbed multiple times on a bus in Jerusalem. He was honored in a memorial ceremony is his hometown of Newton, Massachusetts on Sunday.

Lakin noted in The New York Times piece that his family joined a recently filed class-action lawsuit against Facebook, demanding the company take proactive steps to remove incitement to violence.