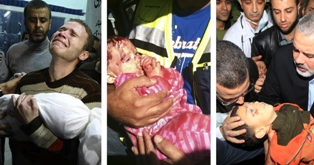 Wounded Israel soldiers have given shocking testimony regarding Hamas’ use of young children as human shields.

Arutz Sheva reports that parents of wounded soldiers spoke to Kol Yisrael on Tuesday and shared some of the disturbing stories they had heard from their sons. They said soldiers have repeatedly seen young children in Sheijaya, Gaza, be sent out into the streets with guns to try to attack IDF troops.

One parent reported that terrorists had run at IDF soldiers with a gun in one hand and a baby in the other, apparently in hopes that the soldiers would see the child and hold their fire. If soldiers fired, the parent added, the child’s death could be used as propaganda against Israel.

“They’re continuing the same trick of using children as human shields, just as they did in Operation Cast Lead,” one father said. Women are used as human shields as well, he added.