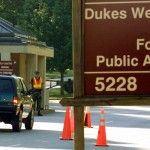 The U.S. Army base at Fort Lee, Virginia, was briefly locked down when a female soldier fired a gun at herself and was hurt. The U.S. Army said the soldier barricaded herself in an office and shot herself in the head with a non-service weapon while law-enforcement authorities tried to negotiate with her. Maj. Gen. Stephen Lyons said the soldier, who has served for 14 years and holds the rank of sergeant first class, was throwing objects around the office. She was in the third floor of the four-story building that houses the Army’s Combined Arms Support Command (CASCOM). Some 1,100 people were in the building at the time, but there were no other reported injuries. The Army has not revealed the soldier’s name or medical status, but said she had been taken to Virginia Commonwealth University Medical Center in Richmond. An all-clear was issued shortly after the lockdown was issued. Read more at USA Today. {Andy Heller-Matzav.com Newscenter}