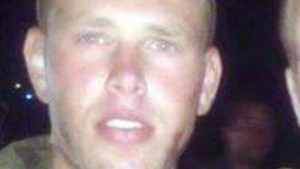 Sergeant Omri Levi, 19, from Sdei Chemed near Kfar Saba is the soldier who was killed in last night’s terror attack in Beer Sheva. Also killed in the attack was an illegal alien from Eritrea who was shot by the security forces after they mistook him for a terrorist.

The IDF stated that Levi was promoted from corporal to sergeant after his death. He left behind a mother and two brothers. The time of his funeral has not been set.

Ze’ev Patal, chairman of Sdei Chemed and a friend of Levi’s family, recounted his difficult emotions: “The family is in shock. Three years ago, his father died of cardiac arrest. Omri was a very popular boy, everyone in the community knew him. He has two little brothers. He was a charming boy, he was tall, he used to laugh a lot and he was a member of a youth group.”

“After the family’s first tragedy, Omri insisted on serving in a combat unit in the military like his father. He had problems in his back and he did everything he could in order to join the Golani Brigade. The pain is tremendous, we are a family community and we will try to stay strong together,” he added.

11 people were injured in the terror attack. This morning, Deputy Soroka Hospital Director Hayman Neumann gave an account of their condition: “Six of the shooting victims are still hospitalized; one of them is a soldier who arrived in the hospital with a serious stomach injury. He is anesthetized and ventilated. The rest of the wounded are still hospitalized in the chirurgic and orthopedic departments. They are suffering wounds in their arms and legs. Four of them had been shot they have moderate to light wounds.”

This morning, tension was felt in the Beer Sheva Central Station and many businesses reported that employees did not show up at work, fearing additional terror attacks. Security in the station has been tightened. The details of the incident are still under investigation and are protected by a gag order. However, it has been said that the terrorist had presumably entered the Beersheba Central Station and shot and critically injured Levi. He then snatched Levi’s weapon and opened fire at passersby. He was neutralized and eliminated by the security guards and forces.