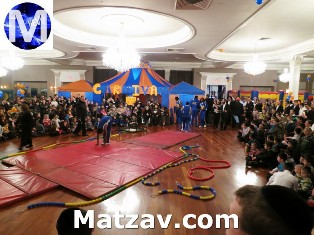 Lakewood, NJ – Close to a thousand children, families and volunteers gathered last night at Lake Terrace Hall in Lakewood for an evening of entertainment and excitement. When a child is diagnosed with serious illness, the family is plunged into darkness and there is often little to look forward to and much to dread. Misameach is an organization that was founded to bring the spark of joy back into the lives of these children and their families by providing entertainment through a variety of mediums including bedside performances, a multimedia lending library and a dizzying array of activities and events designed to give the sick child and his family a reason to smile again.

The annual Misameach midwinter gala party is one of the most eagerly anticipated events, as children of all ages look forward to an evening of nonstop fun and action, an evening to forget their pain and their worries and to revel in the simple delights of life like any child their age. This year’s party did not disappoint. Gaily decorated in the Misameach colors, the elegant hall came to life with balloons, centerpieces and a massive welcoming arch bearing the organization’s logo.

Children received toys as a door prize, as well as cotton candy, pop corn and ices. A lavish dinner buffet included hot dogs with all the trimmings, sesame chicken, salads, a magnificent fruit platter, desserts and more. Small, cozy round tables afforded attendees the opportunity to bond with like-minded parents while their children were kept entertained by the plethora of games and activities. Inflatable rides, an intricate homemade tunnel maze, face painters and refreshment stands lined the large hall. A mammoth carnival tent designed by Meir Kolko of the Tristate Prop Shop and erected by talented and dedicated volunteers held a craft station as well as over a dozen games and activities where children competed to receive tickets that were ultimately redeemable for exciting prizes.

A booth in staffed by Ocean County Sherriff Officers allowed children to receive Sherriff ID cards on the spot. The hardworking officers took photographs and fingerprints of every child and then issued them each a personal ID card, quite useful as identification in case of emergency or crisis.

Just when the children thought they couldn’t enjoy themselves any further, the speakers placed strategically around the world burst into song, heralding the live entertainment portion of the evening. The entertainment featured an impressive lineup of singers, magicians, entertainers and performers who dedicated their evening to bringing joy and laughter to the lives of the Misameach children and their families. Familiar songs were sung and the atmosphere turned electric as lively volunteers in costume took their charges by the hand and danced with them in the center of the room. And while notable names in the music industry took to the mike, it was readily apparent that the true stars were not the ones on stage, but those in the audience dancing as if they had not a care in the world

The Chicago Boyz Acrobatic Team gave a dazzling show, leaving the children and adults openmouthed at their astounding stunts and feats.

After one final round of spirited dancing, families began gathering their prizes, projects and sticky-faced progeny for the return trip home. Leaving the cozy hall for the night air turned chilly, all of the attendees carried the warmth of the evening deep in their hearts, where its memories will keep them warm and comforted during the long, chilly nights ahead. And the smiles etched upon the faces of their children will last long after the final notes of song fade away and the final blue and orange balloons burst into oblivion.