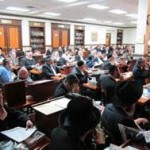 Rabbi Genack gave a presentation on “Understanding Bishul Akum” and the many reasons the OU permits companies to cook tuna.

In his seminar “What Could be Wrong With…?” Rabbi Elefant discussed numerous relevant fascinating kashrus issues such as Israeli produce; Shabbos affairs and party planners; and drinking Starbucks coffee at their various outlets.

Rabbi Fuchs’ power point on Practical Bedikas Toyloim was of great interest to the packed shul and especially to the many women in the Ezras Nashim, which included several prominent rebbetzins.

“There was a buzz before the event with calls, emails and/or participants coming from Toronto, New Jersey, Monsey, Manhattan and other locations,” declared Rabbi Yosef Grossman, Master of Ceremonies and Senior Educational Rabbinic Coordinator of OU Kosher. “After the event the OU received very positive feedback. After receiving many calls and emails, we are working to have the videos up on the ASK OU web page on the OU website as soon as possible.”

Rabbi Shaul Gold, Rabbinic Coordinator for OU Kosher, expanded on the event’s successful turnout. “The feedback that I received from neighbors and fellow mispallelim in my local shul was extremely positive,” he said. “Everyone felt that they learned much and that it was time well spent.

He added, “Many were proud of the new word they learned – ‘thrips’(a type of tiny insects found in vegetables).

Rabbi Grossman expressed his gratitude to Moshe Nussbaum, the shul’s gabai and to the Harry H. Beren Foundation of New Jersey and all the other local sponsors who made the event possible.