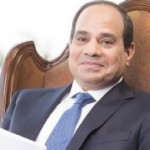 Sisi, a former army chief who overthrew President Mohamed Mursi last year, is battling militants in the Sinai Peninsula who have killed scores of policemen and soldiers.

The retired field marshal has sought to link his oft-criticism campaign against hardline opposition and militants with the fight against organisations such as the IS, which controls swathes of Iraq and Syria.

Yesterday, however, he singled out the floundering peace process which he said contributed to a “fertile environment for the growth and spread of extremism, violence and terrorism.”

Long drawn out US-brokered negotiations between Palestinian president Mahmoud Abbas and Israel collapsed in April with both sides blaming each other.

“What strengthens this environment, and gives excuses to those who exploit religion and terrorism, is the continuation of the Palestinian cause for decades without an equitable resolution,” his office quoted him as saying in a statement.

Egypt was the first Arab country that signed a peace deal with Israel, in 1979, but ties have remained chilly.

Sisi has been supportive of Abbas but hostile to the Hamas rulers of Gaza who have ties with the Muslim Brotherhood movement which he ousted from power.

During the latest Gaza conflict between Israel and Hamas, Egypt, a traditional mediator, at first proposed a ceasefire deal which Hamas charged was favourable to the Jewish state.

Hamas eventually agreed last week to another Egyptian proposal after more than a month of committing terroristic attacks against Israel.

Leave a Reply to Me Cancel reply