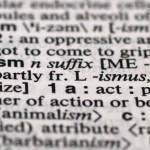 Singular “they,” the gender-neutral pronoun, has been named the Word of the Year by a crowd of over 200 linguists at the American Dialect Society’s annual meeting in Washington, D.C. on Friday evening.

In a landslide vote, the language experts chose singular they over “thanks, Obama,” ammosexual, “on fleek,” and other contenders for this annual award given to the most significant term or word in the past year.

Singular they, which The Post officially adopted in its Style guide in 2015, is already a common habit in American speech. An example: “Everyone wants their cat to succeed.”

Earlier, the so-called proper way to say it would have been, “Everyone wants his or her cat to succeed.”

But what gave this word new prominence was its usefulness as a way to refer to people who don’t want to be called “he” or “she.”

“We know about singular they already — we use it everyday without thinking about it, so this is bringing it to the fore in a more conscious way, and also playing into emerging ideas about gender identity,” said linguist Ben Zimmer, language columnist for the Wall Street Journal, who presided over the voting this Friday afternoon. Read more here.