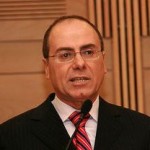 Israeli Interior Minister Silvan Shalom announced Sunday that he was resigning from the government and the Knesset amid allegations of personal misconduct.

Law enforcement agencies are determined to continue investigating Silvan Shalom case despite his announcement of retiring from politics: the prosecutor’s office will investigate and police began collecting details of complainants.