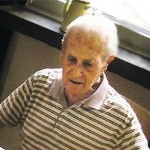 Sidney Shapiro, a famed U.S.-born translator who was one of the few Westerners to gain Chinese citizenship and become a member of a high-level parliamentary body, died on the weekend in Beijing, his granddaughter said. He was 98.

Shapiro was born in New York in 1915 and first came to China in 1947, having been selected by the U.S. army to learn Chinese during World War Two.
He married a Chinese woman who was a supporter of the Communist Party, which at the time was fighting a civil war with the Nationalists, and did not visit the United States again until 1971.

He remained in China after the Communist revolution in 1949, when many Western foreigners left, and became a Chinese citizen in 1963 – an honor reserved only for a select few foreigners judged to have performed special services for China.