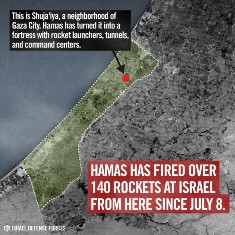 Hamas uses Shuja’iya as a fortress for its weapons, rockets, tunnels and command centers. Hamas uses the neighborhood’s residents as human shields.

This civilian neighborhood in Gaza is home to extensive Hamas infrastructure. In only 13 days, Hamas has fired over 140 rockets from this neighborhood into Israel.

IDF soldiers have found 10 openings to terror tunnels in Shuja’iya. These tunnels are used for infiltrating Israel, smuggling weapons, and launching rockets at Israeli civilians.

The IDF warned civilians in Shuja’iya to evacuate the area many days before striking the terror infrastructure within it. Dropping leaflets, making phone calls and sending text messages are just some of the many actions the IDF has been taking to minimize civilian casualties in Gaza.

Hamas knows that Israel is reluctant to attack areas with many civilians. The terrorist organization fights from within civilian population and uses them as human shields.

Hamas ordered the residents of Shuja’iya to ignore the IDF’s warning and stay in the neighborhood. By doing so, Hamas put them in the line of fire.

Despite the fact that many of the residents ignored warnings and didn’t leave the neighborhood, the IDF continued to operate in the most precise and surgical way possible, targeting only terrorists and their infrastructure.

Hamas broke the humanitarian window when firing at Israel during the two-hour period. Still, the IDF agreed to the Red Cross appeal to extend the Humanitarian widow by another hour.