Among the messages sprayed were the words “Nazi Dogs.” Previously, the vandal sprayed graffiti on a wall at the nearby Yeshivas Mir-Yerushalayim the name of the gabbai of Shtieblach Bais Yisroel, which is known to many bochurim as “Shtiebs.” 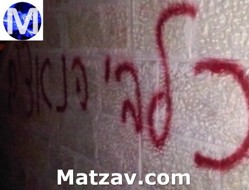 Dozens of bochurim in the area gave chase and one person managed to capture the vandal, but then young man then waved a knife at the person and threatened to stab him, forcing him to leave go of the perpetrator.

Just this past Shabbos, mispallelim at Shtieblach Bais Yisroel discovered that on Friday night someone had sprayed Magen Dovid-shaped graffiti.

Local residents are a bit frustrated at the slow response of the police in identifying and apprehending the vandals.