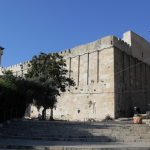 This morning, Palestinians from the Abu Sneineh neighborhood of Chevron fired at Israeli vehicles that were on their way to the Meoras Hamachpeilah. No injuries were reported in the attack. Damage was reported to cars parked near the area of the shooting.

Security forces arrived at the scene and began searching for the shooters in the nearby neighborhoods.

A wave of Palestinian attacks including stabbings, shootings and car ramming attacks have killed 22 Israelis since the beginning of October. Seven of the victims were killed last week alone.