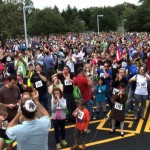 More than 1,000 people blew their way into the history books on Sunday in Whippany, setting a new record for the world’s largest shofar ensemble.

Participants blasted the shofros in unison for five straight minutes in the parking lot of the Alex Aidekman Family Jewish Community Campus.

New Jersey now can have the bragging rights as home of the biggest shofar band on the planet, at least according to Guinness World Records.

The previous holder of the title was Swampscott, Massachusetts, where 796 shofros were blown simultaneously on a beach in 2006.

The event, called Great Shofar Blowout, was presented by the Partnership for Jewish Learning and Life. It has actually been in works since 2006. Organizers waited for a year in which Rosh Hashanah falls later in September so they would have time to coordinate a series of workshops for shofar beginners.