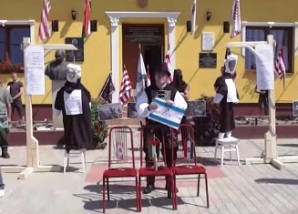 [Video below.] A mayor of a rural town in eastern Hungary held a mock medieval-style public execution of Israeli Prime Minister Benjamin Netanyahu and former president Shimon Peres in order to protest Israel’s military operation against Hamas in Gaza.

According to a video posted online, Erpatak Mayor Mihaly Zoltan Orosz, who hails from the neo-Nazi Hungarian Jobbik Party, is seen standing in a traditional Hungarian costume with effigies of Netanyahu and Peres hanging behind him. After reading an anti-Israel speech, a man wearing the black hood of an executioner kicks out chairs holding the effigies, marking the Israeli leaders’ executions.

The Hungarian Foreign Ministry condemned the mock execution, saying, “The mayor has used the conflict in Gaza and its innocent victims as an excuse to spread hate-inducing propaganda.”

As is the case in the rest of Europe, anti-Semitism has been on the rise in Hungary. The Jobbik Party came in third in Hungary’s parliamentary elections in April.