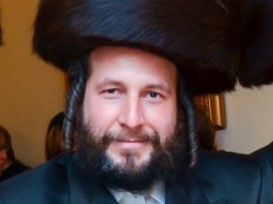 Updated: Shock and sadness pervade Jewish communities around the world as Yidden learn of the news that the body of R’ Menachem Stark, who was kidnapped near his office late Thursday night, was found in a dumpster in Long Island.

The body was discovered 20 miles away from where Menachem was abducted, in a trash container at a Getty gas station in Great Neck.

The body was found at about 4 p.m., just before Shabbos.

The 39-year-old Satmar real estate businessman left his office, Southside Associates on Rutledge Street, between Broadway and Harrison, on Thursday at about 11:35 p.m. and was attacked in the darkness.

Surveillance video (which can be seen here) showed Menachem being approached outside his office by a man. As Menachem battled the assailant, a vehicle arrived and a second man joined in trying to hold him down. Menachem tried to fight the men off in the snow, but after a few minutes, they overcame him and deposited him in a 2006 or 2007 white Dodge minivan, which did not have license plates.

The scuffle occurred near the Amazing Savings store on the block.

The body was found along a commercial stretch of Cutter Mill Road in Great Neck.

Fernando Cerff, owner of the Cutter Mill Road gas station, arrived to work early Friday morning, at about 7 o’clock, to shovel out his plows. He saw smoke billowing from a nearby dumpster and had his employees throw snow into it to extinguish the fire, which he assumed was due a cigarette thrown into the receptacle.

When Cerff returned in the afternoon, he approached the dumpster to throw out some garbage from his truck, but immediately knew something was wrong by the smell emanating from the dumpster. He contacted the NYPD. Officers discovered Menachem’s body and took away the entire dumpster.

The body, sources indicate, had been wrapped in fabric and set on fire. It seems that Menachem died of suffocation, but tests are being performed by the Nassau County medical examiner to determine when serious burns found on his body occurred.

Police, according to reports, had difficulty contacting family members due to Shabbos having commenced. Detectives visited the Stark home at around 1:30 p.m. today, Shabbos afternoon, to inform the Stark relatives of the devastating news.

An investigation by the NYPD is ongoing.

Menachem is survived by his wife, five daughters and two sons, and extended family and friends mourning his tragic petirah. His oldest child is 16 years old.

Council Member Stephen Levin said, “My deepest condolences go to the family of Menachem Stark and the Williamsburg community. The NYPD and Nassau County Police Department are continuing to investigate this incident and will bring those responsible for this heinous crime to justice. If anyone has information regarding this crime I urge them to come forward and contact the police.”

Rabbi Moshe Dovid Niederman, Executive Director of United Jewish Organizations of Williamsburg, said, “The community mourns the death of our beloved community member Menachem Stark, and our prayers are with his family who loved and cared for him immensely. Menachem Stark was a charitable man, donating to institutions and needy individuals alike, and everyone in the community is devastated and feels this loss on a personal level. We are saddened and dumbfounded how people can commit such heinous crimes against anyone, but especially against such a generous person who wouldn’t hurt a fly. Every resource must be expended to apprehend the criminals responsible and we call on anyone with information about this crime to come forward. The community thanks the New York and Nassau County Police Departments who have worked around the clock on this case.”