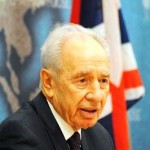 “Qatar does not have the right to send money for rockets and tunnels which are fired at innocent civilians. Their funding of terror the must stop. If they want to build then they should, but they must not be allowed to destroy,” Peres said in a press conference with Ban.

Over the last few years, Qatar has supported Hamas and its Muslim Brotherhood parent organization, which has strained Qatari ties with Egypt as well as other Gulf states such as Saudi Arabia and the United Arab Emirates. At the same time, Egyptian officials have accused Qatar of encouraging Hamas to reject an Egyptian-proposed cease-fire for its conflict with Israel last week.

On his final day as Israeli president, Peres also spoke about the situation in Gaza, saying that no country would tolerate rockets being fired at its civilians.

“Every country has the obligation to protect itself against attacks and attempts to kill innocent civilians,” he said. “No state in the world would be willing to accept rockets fired at its mothers and children from the sky and terrorists emerging from tunnels to kill innocents for no reason and with no justification.”