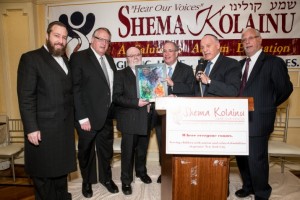 Shema Kolainu – Hear Our Voices hosted its 12th Annual Legislative Breakfast celebrating advocacy efforts that resulted in the historic agreement announced in City Hall by Mayor de Blasio in conjunction with NYS Speaker Sheldon Silver regarding the placement of special needs children in private schools. The changes announced will be implemented by September 1 and will expedite the process for families seeking assistance and financial reimbursement in placing their children with special needs in schooling. It will also reduce the legal headache and paperwork associated with the process of placing children in special programs.

Speaker Silver was honored for his role in this monumental achievement and commended for his commitment to all children and schools across the city that are better off because of his leadership and advocacy.

Dr. Joshua Weinstein, founder & president of Shema Kolainu emphasized “that this year, more than ever, the need to bring awareness and recognition to the autism community is critical as statistics now show that 1 in 68 children in the population are autistic”.

Shema Kolainu welcomed a diverse group of attendees including community leaders, civic and religious leaders, as well as elected officials and honored members of the City Council and the State Legislature who have shown commitment and passion for helping those in the autism community especially when it comes to giving access to the appropriate resources for children on the spectrum.

NYS Senator Simcha Felder delivered the keynote address emphasizing “the need for every citizen to be advocates and to speak out about the needs of their communities.” It was Senator Felder’s passionate speech on the Senate floor that expressed the feelings of the community regarding the Special Ed bill which greatly contributed to the historic announcement.

Shema Kolainu Board Chair Peter Rebenwurzel introduced NYC Councilmember Brad Lander who secured a million dollars to restore Brizzi Playground located across the street Shema Kolainu and utilized daily by the children from the entire community was presented with the “Children Appreciate Award”.

Jeff Leb- New York State Director of Political Affairs for the Orthodox Union was praised by NYC Council-Member Mark Levine as a “mentch” and for his advocacy efforts on behalf of special needs children.

Special recognition was given to Council Speaker Melissa Mark-Viverito who was represented by Jennie Berger for funding a total of $690,000 for the city-wide Autism Initiative that will benefit numerous programs an effort championed by Councilman Mark Weprin who sponsors the autism initiative and NYS Assemblymember David Weprin who pioneered the program.

As always the breakfast is masterfully MC’d by Menachem Lubinsky, CEO of Lubicom Marketing Consulting and Kalman Yeger a top adviser to various elected officials in NYC and coordinated by The Friedlander Group.

“I would like to thank the honorees and distinguished guests in the legislature that push for funding and resources for the autism community and more importantly the need to continue advocating on behalf of those children who need the support of therapists, teachers, parents, and community members alike. All children, whether they are on the spectrum or not, deserve access to a proper education that meets their appropriate needs. Your unwavering support regarding issues important to the autism community and your recognition of the work that Shema Kolainu does is what inspires us and allows us to fulfill our commitment to our children” concluded Dr.Weinstein