[Update below.] Philip Hourevitch reports for the New Yorker: Rabbis saw to it long ago that it’s against the law to have a pig farm on Jewish-owned land in Israel, so Jewish pig-farmers there (perhaps after consulting a legal-loophole-minded rabbi of their own) built their sties on platforms above the land-taking the practice of raising pigs to a whole new level.

But if you want actual Kosher pork-pork spare ribs, pork cutlets, center-cut pork chops, all labeled in Hebrew “Sh’Chita Beit Yosef” (i.e., kosher slaughtered)-you get that only in New York, only at the Associated Supermarket at 4407 Greenpoint Avenue, in Sunnyside, Queens, and only for a few hours today, between the time the Israeli artist Oded Hirsch snapped the above photo on his cell phone and it got forwarded to me, and the time I phoned Aris Duran, the supermarket manager, for an explanation.

“What are you saying?” Duran asked. “Pork cannot be kosher.” So I e-mailed him the photo. He called me right back, and said he was going to pull all the meat off the shelves. “It was a mistake,” he said, and a few seconds later he called back and left a message to say, “Thanks for alerting me.” 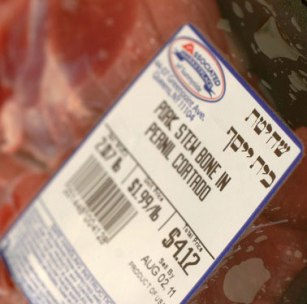 Duran had to leave a message because I was on the other line to the Orthodox Union, whose voice-mail recording describes it as “the global leader in Kosher supervision and the world’s largest Jewish resource.” (So much for the Torah and the Talmud.) I pressed two for matters Kosher, and listened to another menu until I heard: “To report a product that may be mistakenly labelled, press four.” I did, and was invited to leave a message for Howard Katzenstein, who called me right back. “I have to tell you,” he told me, “my father-in-law read your magazine religiously-or some would say irreligiously. How can I help you?” I told him about the kosher pork for sale in Sunnyside. “If the price is right, I say go with it, right?” Katzenstein said, and giggled.

But seriously, Katzenstein told me, he hears of such outrages only “rarely.” “Computer-generated labels,” he said, “they’re a nightmare waiting to happen.” The last two words of the stamp on the pork in Queens, “Beit Yusef,” mean “according to Sephardic custom,” said Katzenstein, an Ashkenazi Jew. “But I don’t think even the Sephardim would accept that.”

For further information he referred me to the head of Kosher-law enforcement for New York State, Rabbi Luzer Weiss (“but he’s a winner in my book,” Katzenstein said). In this era of budget cuts, the state has laid off all eight of its Kosher-enforcement inspectors, leaving Rabbi Weiss as a one-man department, and apparently he was on other cases, because I haven’t heard back from him.*

Oded Hirsch, meanwhile, went back to the supermarket with a proper camera. He’s an artist, after all, and thought he could come up with a better image than his initial cell-phone snapshot. By the time he got there, just a few minutes after I had e-mailed that picture to Aris Duran, he found the meat department almost entirely purged of pork. “A pack of six workers were scanning the fridge frantically,” Hirsch reported. “Anyway, I did manage to sneak a few more shots.” He attached the clandestine images (see below) and signed off: “Ha ha.”

*UPDATE: On Thursday morning, I heard back from Rabbi Luzer Weiss, the director of the New York State Department of Agriculture and Markets Kosher Law Enforcement, who e-mailed:

I was at the store this morning and spoke to the manager. He said that this store at no time sells kosher meat and as a matter of fact specializes in pork cuts only. The machine was bought used and had been at the store only a few days. From what was on the label most likely the machine came from a store that sold kosher. He said an employee punched the key to print labels and put the labels the machine printed on the packages. When it was brought to his attention he had a person from where he bought the machine delete the words. The machine now can’t print any kosher labels-I saw it myself this morning and had labels printed which I took with me.