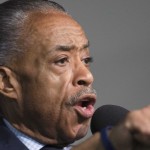 “Michael Brown is gone. You can run whatever video you want. He is not on trial. America is on trial!” Sharpton declared at the Greater St. Marks Family Church, according to video posted by Fox 2. “I have never in all my years seen something as offensive and insulting as a police chief releasing a tape of a young man trying to smear him before we even have his funeral.”

The relatively small city of Ferguson, Missouri, has been the epicenter of racially charged protests since Brown’s death just over a week ago. Local police have aggressively cracked down on the demonstrations, wielding military-style weapons, issuing curfews, and arresting a number of protesters and at least two reporters.

Sharpton argued the U.S. faces a “defining moment” for how police authorities manage the protests.

“America as a nation, Missouri as a state, Ferguson as a city, is at a defining moment on whether or not we know and are mature enough to handle policing – whether it goes over the line or not. We cannot lecture nations around the world about how they handle policing and we have an inability of handling it in our own nation. All policemen are not bad; most policemen are not bad. But all of them are not right all the time. And when they’re wrong, they must pay for being wrong just like citizens pay when they’re wrong,” Sharpton said.

In order to make his point, the civil rights activist condemned looting in Ferguson and challenged police to do the same when officers fatally shoot members of the public.

“Looting is wrong. We condemn the looters,” Sharpton said. “But when will law enforcement condemn police who shoot and kill our young people? We got to be honest on both sides of this discussion.”