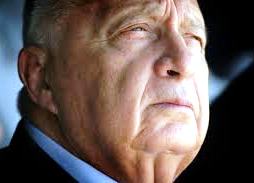 In his last public appearance, on January 1, 2006, former Israeli Prime Minister Ariel Sharon met with participants of the MASA program that brings young Jews from other countries to Israel. Three days after the meeting, Sharon suffered a stroke. He fell into a coma, from which he never recovered.

The following is a portion of his remarks, his last comments in public:

“Israel is the only place in the world where Jews have the right and the power to defend themselves, by themselves,” Sharon said. “And as a Jew – and I am first of all a Jew, and that is the most important thing for me – I know that it is not only the only place in the world where we have the right and the power to defend ourselves by ourselves; it’s also our duty. I think that each of us is responsible for the future of the Jewish people. Our people has existed for about 4,000 years now. And I worry about what will happen in 30 years’ time, in 300 years’ time, and with G-d’s help, in 3,000 years’ time. And I don’t see it as my personal responsibility, but it is the responsibility of each of you. That’s what you have to feel. And that’s what we owe to our fathers and forefathers, in order to be able to ensure that the Jewish people will exist.”